WELCOME TO THE 10TH EDITION OF THE EUROVISION DIARY!

Another day, another dollar! I know…… we’re still not at the venue, but you just have to hold your pants for another 24 hours, we have a pretty long pre-production to cover, SO STAY AWAKE!

I had to go to Holland to see Cyberhoist, since we are using the new Generation of their hoists in our show. Did you know that Eurovision 2003 was the FIRST show in the world using Cyberhoist? Alpha Version 3 if I remember correctly. It feels great to have you guys back! One person that is not back though is Mr. Stuart Barlow, our beloved viewing room producer. He just opened up a new restaurant in Cologne, and decided to focus on that rather than being locked up in a room with a TV for a month……… I went to see him, and Lighting Designer Jerry Appelt (Eurovision 2011 & 2012) since I was in the hood.
If you find yourself in Cologne, GO THERE!

But…..we did not do fun trips….. we did horrible ones like this as well during pre-production. Litecom is our supplier for lighting and rigging, and since their headquarters are in Copenhagen, we had to go there a couple times for meetings. The experience in the private wine room was quite shocking. All that wine, and all that food………

But of course that was only the starter……..Danes……. How can you NOT love them………. No, but seriously, I am SO happy with the attitude and the 100% we’ve gotten from them so far. Litecom is a privately owned company, and you can immediately feel the passion from the entire team, and the owners. They are into this industry becuase they LOVE it. It reminds me a lot about Spectra, the company I used to work with back in the days.

And speaking of Danes, let’s make this even more Scandinavian than it already is! Markku Aalto is from Finland, you know the country that doesn’t know how to play ice hockey, and he loves to blow shit up! Welcome back buddy!

Back to Sweden, and our multi camera directors Robin Hoffwander and Daniel Jelinek. As I’m sure you can tell by now, we’ve been very keen on bringing back the same team as in 2013, since, that is, in our mind, the best freaking Eurovision ever. Well…….. before this one!

The last checks at the venue are done. Here my technical manager Angry (in the middle) with Litecom’s techncial manager, Balder to the right and Litecom’s key account manager Girts to the left.

The last technical tests are done as well, including mounting mirrors on projectors using wooden sticks…………….

And all A functions within the team went to a CPR course, in case of emergency. For some reason, our Contest Producer, Christer Björkman refused to let go of his doll……. we tried to explain to him that it was dead upon arrival……… oh well……………

Last fish joke, I promise: How do you keep a fish from smelling? Cut off his nose! 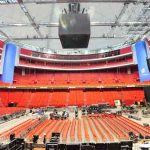 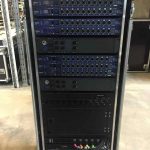